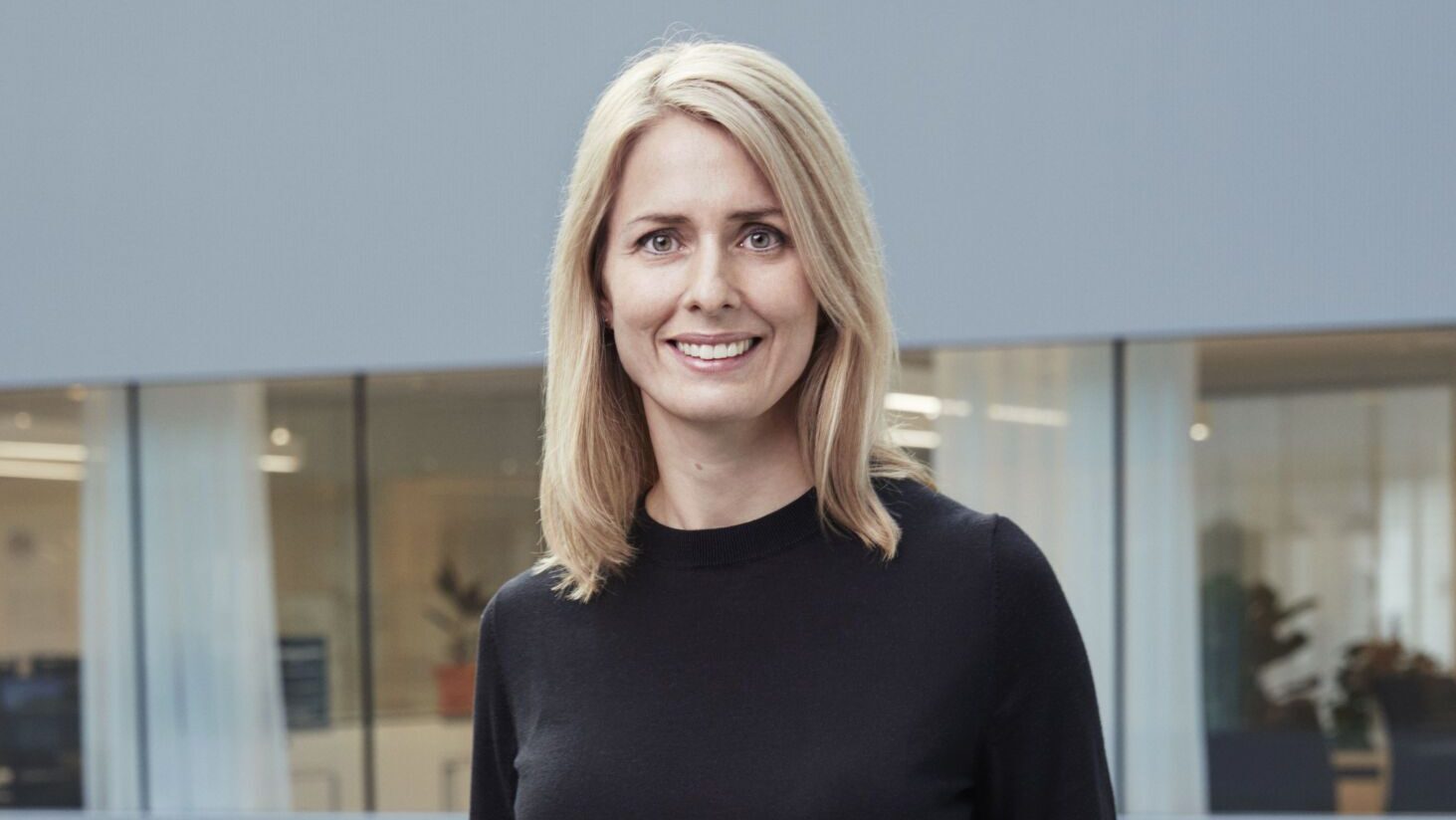 Helena Helmersson is shouldering major challenges since taking the helm at Swedish retail fashion giant H&M at the beginning of 2020. While the Covid-19 pandemic is undoubtedly the most urgent challenge, it has also hastened the need to tackle what was already seen as her two biggest tasks: Adapting to the digital shift in our shopping habits and proving that fast fashion and sustainability are not contradictions in terms.

”This was not what I expected.”

These words must count as one of the great understatements of 2020. They were uttered by Helena Helmersson to the Swedish press in early April, when the Covid-19 pandemic had thrown her deep into crisis management mode barely two months after taking charge at the global retail fashion giant H&M. She was being characteristically modest and typically matter-of-fact.

Some 80 percent of the group’s shops around the world closed at the height of the global lockdowns, while a dramatic drop in sales trigged financial losses and warnings of potentially thousands of jobs lost, affecting not just H&M’s roughly 179,000 employees, but also thousands of others in the fashion giant’s massive supply chain.

Though it was not a challenge she expected, the Swede is clearly aware that the Covid-19 crisis will only intensify two other challenges that were already pinpointed as her biggest tasks when she took over as CEO: Responding to the digital transformation of our shopping habits – something the company was previously seen as slow to do – and taking sustainability to a new level that looks increasingly crucial to the fashion giant’s future.

Sustainability is where Helena Helmersson is expected to have the biggest impact as head of the world’s second-biggest retail fashion group (superseded only by Spain’s Inditex group, owner of the Zara chain).

Perhaps more than anyone in the global fashion industry, she could be the person to prove the critics wrong when they claim that sustainability and fast fashion are contradictions in terms. It remains a massive challenge: The apparel/footwear industry is estimated to be responsible for some 4 percent of the world’s total CO2 emissions, equivalent to the combined emissions of France, Germany and the UK – three of the world’s biggest economies.

And the industry is likely to miss the goal set out in the 2015 Paris Climate Agreement of limiting global temperature rises to 1.5 degrees, if it does not act to halve its emissions by 2030. That is the stark warning presented in the Fashion on Climate report released in August by consulting giant McKinsey & Company and Global Fashion Agenda, the Copenhagen-based advocacy forum which seeks to move the industry to take urgent action on sustainability.

Helena Helmersson is unusual for one major reason: She spent five years as the company’s Chief Sustainability Officer and is perhaps the only CEO at major global company to have come from such a role. Her appointment was seen as a strong sign that H&M would push the sustainability efforts that the group began in the 1990s to take centre stage. Helmersson stated as much when she faced her first press briefing as the company’s freshly appointed CEO:

”Sustainability is completely critical to our business and an important part of our values – who we want to be.”

A few months earlier, in October 2019, Helena Helmersson received the ”Influential Leader Award” from AACSB, an organisation representing business schools around the world. It was given for her commitment to highlighting not just climate change and environmental issues but also the social and economic aspects of sustainability. In her work, she has influenced the entire industry, it was said.

”When I started as the head of sustainability, it was an area that was still at little bit on the sidelines. There was a great sustainability team, but we didn’t have all countries and departments setting sustainability goals which they were responsible for. That is absolutely the case today,” Helmersson stated at the time, stressing the importance of systemic thinking.

The Swede – who turns 47 in October and is one of the few women to lead a major global fashion company – has worked at H&M since 1997 and has had an impressive career that has led her from being a controller in the purchasing department at the head office in Stockholm, through several years in Bangladesh and Hong Kong working with HR issues at the company’s production plants and overseeing the logistics of H&Ms underwear manufacturing in the region.

Helmerson once stated that she wished she had asked herself ”why?” and sought a higher purpose far earlier in her career. She did so only after moving to Asia, which opened her eyes to H&M’s social responsibility, not least in improving the pay and working conditions for thousands of garment workers across South East Asia. The fast fashion industry has been criticised for relying on poorly paid garment workers in developing countries to be able to sell cheap clothes to Western consumers addicted to endlessly buying-and-throwing-away.

Helmersson’s appointment as Chief Sustainability Officer in 2010 soon brought her wider attention. In 2014 she was named by Swedish business title Veckans Affärer as Sweden’s most influential business woman, citing her ”power to change the world” through H&M’s global reach.

It was a rare occasion of someone other than a CEO topping the most-influential list. Veckans Affärer predicted that sustainability would be completely crucial to H&M’s entire business model and might be the thing that saves fast fashion. Helmersson then took charge of H&M’s entire global production chain. And to company insiders, her final leap to the top seemed clear when she was appointed Chief Operating Officer in 2018.

Soon, she was allegedly referred to internally as the ”Crown Princess”. Though she declared that the offer of the top CEO job was ”completely fantastic and so unexpected”, it was not a surprise to many.

But does H&M actually walk the talk? Is the Swedish fashion giant as sustainable as it says? Not according to critics who have long accused H&M of greenwashing to appear more sustainable and earth-friendly than it is. Tellingly, the criticism is rarely aimed at actual steps that H&M has taken towards stated goals such as being a ”fully circular” business by 2030 – by minimising waste, removing chemicals, re- and up-cycling textiles and maximising the use of sustainably produced fabrics – and achieving ”climate positivity” by 2040, i.e. moving beyond net-zero emissions.

Last year, when H&M was criticised by prominent anti-fast fashion campaigner Venetia La Marna for plans to make clothes from the sustainable fabric Circulose – made from up-cycled clothing and fashion waste by Swedish company Renewcell – her argument was not that the fabric is not sustainable. In fact, it ticks a lot of boxes. Instead, she argued: ”Ultimately, the sheer amount of product H&M produces is causing irreversible harm to both planet and people and completely outweighs their sustainability efforts. Fashion this fast can never and will never be sustainable.”

Some would say this is a like telling oil giants they can never be sustainable. Should they not even try? Helmersson and H&M believe that the impact of a global fashion chain thinking sustainably is inevitably far greater, because its ability to influence reaches from the highest political level down to the local factory floor. She does not deny that it is a work in progress. ”I don’t think sustainability is work that you ever finish,” she stated back in January 2020.

The Covid-19 crisis has clearly only made her more determined. She was one of 37 leading CEOs, politicians and leaders from other organisations across Europe who in April signed an open letter pushing to use the crisis to move towards climate neutrality and ”healthy ecosystems” through so-called Green Recovery Investment Packages. Among other signatories were the heads of LEGO, Volvo and IKEA. And in her first extensive interview as CEO, with Swedish business daily Dagens Industri in August, she again stressed that this agenda has only one way to go: much further.

”This entire crisis has made some things clearer. Digitalisation is even more important now, and so is sustainability. It feels incredibly important to us to continue to lead the industry towards a sustainable future,” Helmersson said. This IS something she expects.

1997 Graduates with a Master’s in International Business and Economics from Umeå School of Business. Starts work at H&M in Stockholm as a financial controller.

2007 Moves to Dhaka, Bangladesh, as HR manager at the H&M production plant, and later to Hong Kong, as production manager for underwear in South East Asia.

2015 Moves back to Hong Kong with
responsibility for the global production chain.

Married to Jens Helmersson (they met on the job), two children.