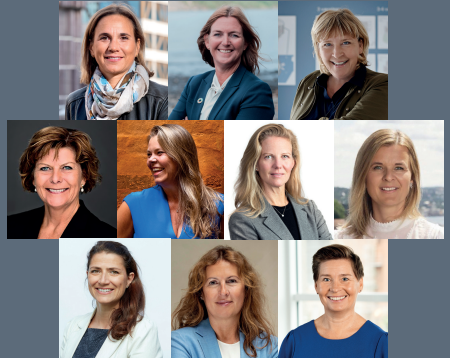 Nordic Business pay tribute to 10 women in the Nordic real estate industry who have achieved great successes in their careers and are also a true inspiration for future female talents in the industry.

Biljana Pehrsson, CEO, Castellum
In Swedish management circles, they speak of “The Biljana effect”, named after the Castellum’s Biljana Perhsson, famous for her recent, very public case where she was CEO of the real
estate company Kungsledan. When Castellum made a bid to buy Kungsledan recently, they promised Biljana Pehrsson the CEO position of the merged company. She was an only child
and in 1970, when she was just four months old, her parents emigrated from Belgrade (present-day Serbia) to Sweden. From a young age, it became clear that she was destined for a great career in the real estate industry, taking some less-travelled paths along the way, including three years in Moscow. In an interview, she pointed out that she had never attended
a leadership course. Instead, led by her own intuitions, she followed her instincts and made successful decisions, whether the challenge was the financial crisis, a tax case against Kungsledan, or more recently, the covid-19 pandemic. With the acquisition of Kungsledan, Castellum is by far the leading listed real estate company in the Nordic region. Their portfolio consists of commercial real estate, primarily in major Swedish cities, but throughout the 2010’s the company has also branched out in Copenhagen and Helsinki. 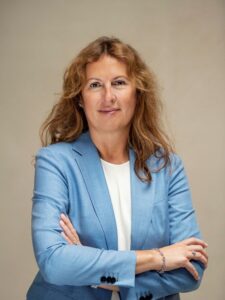 Johanne Skogestig, CEO, Vasakronen
When Johanne Skogestig took on the position as Chief Executive Chair of Sweden’s, and the Nordic region’s largest real estate company, Vasakronen, in November 2019, she may have believed that her career had reached its peak. For seven years she had managed senior positions in the group, and prior to that she gained experience as an investment manager in several smaller, but significant real estate companies. She was content in her career and took a well-deserved skiing holiday in Austria later in the winter. It was at this time that the world turned upside down as it became clear how serious the covid-19 pandemic was. Fortunately, Skogestig was not among those infected, but upon her return she had to work from home. Vasakronen is owned by the top four (AP) pension funds in Sweden. Its main focus is purchasing and investing predominately in office and retail properties. Amongst their objectives is to establish an ongoing return that is greater than the industry average, and to be perceived as the most desirable employer in the industry.
Headquarters: Stockholm
Employees: Approx. 293
Rental income 2020: SEK 7.0 billion 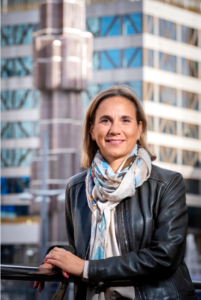 Louise Lindh, CEO and Board Member of Lundbergs Fatigheter
There are many family-owned companies, but there are few that continue to run a growing business themselves. L E Lundbergförtagen is one of those exceptions. CEO, Louise Lindh, is the granddaughter of founder Lars Erik Lundberg, and sits on the board with several family members. It is not the lure of a salary cheque that motivates her; she already holds the 1164th position on Forbes “world’s wealthiest” list. Real estate is the heart and soul of the group of which she co-owns. Originally founded as a construction company, Lars Erik Lundberg later realized that there was a need to supplement the “real estate cycle” and focus on property management. Lundbergs Fastigheter is a predominantly family-owned real estate company with assets of approx. SEK 25 billion.
Headquarters: Norrköping
Employees: Approx. 170
Rental income 2020: SEK 1.5 billion 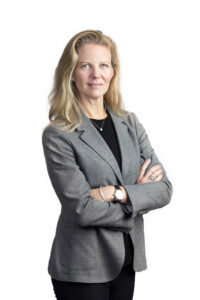 Ulrika Hallengren, CEO, Wihlborgs
Ulrika Hallengren is a leading light in the real estate business and has been working in the industry since a young age. After being involved in many construction projects, she felt it was time for a change. She had already attended a meeting at the new firm, an energy group, when Wihlborg’s former CEO Anders Jarl called her and asked her to manage the construction of a research centre in Lund. She agreed to the position – and a few years later, in 2018, she replaced his position. Here she thrived, without too much influence from the general public and as Wihlborg prefers to develop properties themselves, she became a valuable asset to the company. Wihlborg is a listed real estate company focusing on the Öresund Government. The company has properties worth approx. SEK 50 billion in Malmö, Lund Helsingborg and Copenhagen, with future goals of expanding further. Their strategy is to be a market leader in all areas they operate within.
Headquarters: Malmö
Employees: Approx. 244
Rental income 2020: SEK 3.1 billion 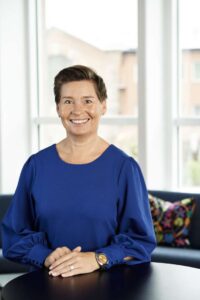 Rikke Lykke, CEO of DEAS Group
In August 2021, Rikke Lykke was hired as Chief Executive of the DEAS group. Her task was to expand the Danish company throughout the Nordic region, which she accomplished due
to her experience in this field. In 2012, she was hired by the German real estate company Patrizia, to grow its Nordic organization. Patrizia became a very successful buyer in the Nordic region over the years. Rikke was promoted six years later to lead the group’s activities in German-speaking countries. She soon climbed the corporate ladder, and eventually served in key group functions. In an interview with “finans.dk”, she mentioned that the organization had become so self-sufficient that she reached a point where she could go no further within the company as there were no more challenges. Rikke Lykke has also engaged in organizational work in t he trade association “EjendomDanmark”. DEAS has a reputation of being one of Denmark’s largest property management companies, which today provides a full service to customers, including for example, asset management and investment advice.
Headquarters: Frederiksberg
Employees: approx. 900
Revenue 2020: DKK 658 million 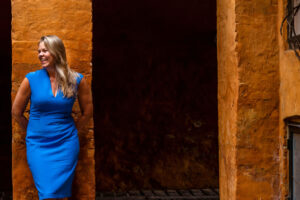 Solveig Rannje, Property Manager, Velliv
Solveig Rannje became a household name in the Danish real estate industry when she was Property Director of SEB Pension for six years in the 2010’s. SEB Pension was one of the pension industry’s smaller players, compared to the PFA where she had previously worked for 15 years. Her employment at SEB Pension came at a time when the property industry needed to recover from the financial crisis, when it was important to monitor the pension industry and know how best to invest the available funds in order to make good returns. When Danica purchased SEB Pension in 2018, Solveig took on the position as Partner and Property Director of the Thylander group. However, she only stayed in this position for approximately a year, after which she went back to the pension business as a property manager and is now employed at one of the largest and most successful companies in the industry, namely Velliv. Velliv is Denmark’s third largest pension company, previously known as “Nordea Liv & Pension”, who sold the homeowners’ association, Velliv, thereby effectively making the company customer-owned. This process was completed in 2019 which has since lead to significant lucrative returns.
Headquarters: Ballerup
Employees: Approx. 600
Revenue premium 2020: DKK 27 billion 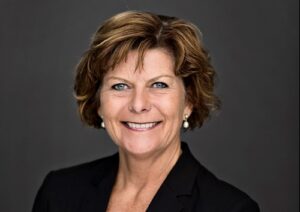 Christina Jørgensen, CEO, Freja Real Estate
The position of CEO, at the state-owned real estate company Freja, may not be the highest profile position in the Danish real estate industry, but one could well argue that it is the most exciting. Here Christina Jørgensen had firsthand information as to which properties became available after the restructuring of the public sector, leaving many gems in between. One of her first projects after she took on the position on 1st June 2021, was to sell Jernbanebyen, a collection of beautiful old workshops and labourers’ cottages, located in the middle of Copenhagen which until recently were unknown to many. Christina Jørgensen is a structural engineer and for six years she was responsible for project developments in the construction company MT Højgaard, before becoming an independent construction consultant. Whilst being an atypical background for a CEO, proving successful in this position at Freja certainly made other major companies in the industry take note. Freja Real Estate is a state-owned company that is responsible for developing and selling established properties that agencies and other public institutions have in surplus. It must be economically viable, but at the same time be sustainable in all areas, including architecturally.
Headquarters: Frederiksberg
Employees: 26
Net sales 2020: DKK 770 million 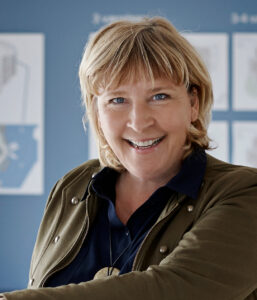 Sonja Horn, CEO, Entra
There is both a visionary and a conservative approach to property – with respect for the fact that great social values are being managed. As chief executive of Entra since 2019, Sonja Horn has spanned both approaches. For example, she and the company were pioneers in working proactively with sustainability. Despite such groundbreaking initiatives, she, the company, and the stock are probably best known for their stability and credibility. Earlier this year, the company defended a hostile acquisition attempt by the Swedish Castellum. Sonja Horn started her career in banking, which soon brought her into contact with the real estate industry, a direction she further developed in Statoil (now Equinor), where she was responsible for parts of the property portfolio, before joining Entra in 2013. Entra is a listed real estate company specializing in office properties in Norway’s four largest cities. The primary customers are public institutions. The company has a high equity capital, with only 40% of their property values being mortgaged.
Headquarters: Oslo
Employees: 175
Rental income 2020: NOK 2.4 billion 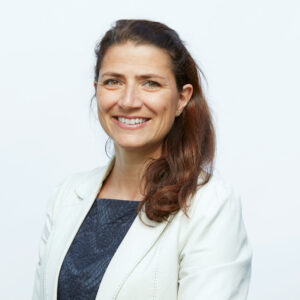 Camilla Krogh, Director, Ferd Eiendom
In early 2020, Camilla Krogh represented many Scandinavian ideals and visions, many reflected in her job. Since taking office last year as CEO of Ferd Eiendom, she has been responsible for developing the company’s grand old properties in Oslo, not least with a focus on sustainability, including the well-being of the properties’ occupants. Cooperation is her key focus. This is something she learnt from being part of a handball team in her youth, which was something she had to put aside when she needed to focus on her career in the construction and real estate industry. As the saying goes “Out with the old, in with the new”. Ferd Eiendom is the property branch of the Ferd Group, which is owned by one of Norway’s wealthiest men, Johan Henrik Andresen, who has two daughters. The company was formerly known as “Tiedemanns group” and originally also traded in tobacco products, with this
division of the company being sold in 2005.
Headquarters: Oslo
Employees (group): 75
Value of properties 2020: NOK 14.3 billion 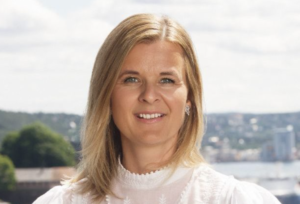 Grete Aspelund, CEO, SWECO Norway
Realigning one’s expectations is important to Grete Aspelund, which she reiterated in an interview with DN, preparing her future employees’ expectations, before joining Sweco’s Norwegian branch in 2016. She can be quite temperamental but controls her emotions in public. Clearly, her commitment to this large, diverse company is important. With many branches spread over the country, activities are varied. Recently, Grete Aspelund has had to deal with crises. On top of the low oil prices that hit the Norwegian economy, she has had to contend with the covid-19 crisis. She still however managed to end 2020 with a profit. Sweco is an architectural and engineering consulting firm with operations in 13 European countries. The Norwegian division is based on an acquired company with a 100-year history. The company specializes in many fields including buildings, facilities and infrastructure, such as bridges.
Headquarters: Oslo
Employees: Approx. 1800
Revenue 2020: NOK 2.473 million 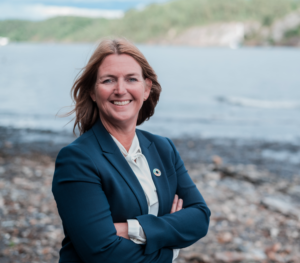